The "Nature" of Miracles (Parshas Bo)

The Miraculous and the Natural

We are complicated beings, living in an exceedingly complex world. Many people become overwhelmed by the complexities of life and choose to live within the confines of simplicity rather than attempt to navigate the tumultuous path towards the truth. Yet, those driven by imagination, curiosity, and a higher will choose to embrace the complexities of this world, seeing the true beauty behind the nuance and sophistication of the Torah and our universe. Those striving for the truth constantly question the nature of the world we live in.

Through the miracles and makkos (plagues) of Yetzias Mitzrayim (Exodus from Egypt), Hashem revealed Himself to the world. The laws of nature were broken, the impossible became possible, the unfathomable, fathomable. But to fully understand and appreciate the meaning of a miracle, we must first attempt to understand nature itself.

The very idea of nature is enigmatic. After all, what do we mean when we refer to the natural? Naturally, what goes up tends to come back down. Nature also causes rainstorms, hurricanes, tornadoes, and appears to be responsible for disease and illness. We tend to give nature credit for most of what happens in this world. However, any thoughtful Jew should be troubled by the concept of nature. If Hashem created this world, how are we supposed to approach nature? Is nature independent from Hashem? To answer these questions, let us take a step back, and analyze the different forms of belief and disbelief in Hashem.

Three Forms of Disbelief in Hashem

At the end of Parshas Bo, the Ramban[1] famously delineates the three basic types of disbelievers in Hashem:

There are a number of reasons why people would feel abandoned and therefore adopt such a theory: Again, we cannot see Hashem in a revealed manner. Additionally, if Hashem is an all-powerful and perfect being, why would He lower Himself to deal with the finite, limited world that we inhabit. Furthermore, when you look around the world, you see so much pain, suffering, bloodshed, and sickness. Even worse, these terrible afflictions often plague tzaddikim (the righteous), while many risha’im (evil men) seem to live peaceful, often extremely pleasant lives. Why would Hashem allow this to happen if He were running the world?[2]

Within this group, others mistakenly think Hashem is like most human beings, who begin a project, eventually tire of it, and move on to something else. They claim that after creating the world, Hashem moved on to some other project or interest, leaving us abandoned in the universe. These are just a few of the reasons that this second group of people claim that Hashem has left our world to the random and coincidental occurrences of nature.

The Ramban continues by explaining that the events of Yetzias Mitzrayim uprooted and disproved all three of these heretical perspectives. By performing the ten makkos, splitting the Yam Suf, and redeeming Klal Yisrael, Hashem shattered each mistaken paradigm. Beyond revealing the fact that Hashem exists, He knows everything that occurs in this world, and He is capable of intervening, Hashem also revealed His all-encompassing power. Through the miraculous events of Yetzias Mitzrayim, Hashem showed His control over - and ability to uproot - the laws of nature. However, the question then becomes: what is nature?

If you take a moment to contemplate nature, you will find that almost everything in this world involves a cause-and-effect relationship. The world seems to abide by certain rules, with very few exceptions. Why does the sun rise every morning? Why do seeds grow when you plant them, give them water, and provide sunshine? Why does time always move forward? How does a complex human body maintain homeostasis? How does such an intricate planet maintain homeostasis? When you take a moment to ponder these questions, you can’t help but wonder: “What is causing all this order?” Of course, the answer must be: nature. This brings us back to our original question: what is nature?

Rav Eliyahu Dessler explains that even those who do believe in Hashem have different ways of understanding nature. These differences in understanding correlate to three distinct levels of belief.

The first level of belief is maintained by those who completely believe in Hashem’s existence, but also believe in a concept called nature. While Hashem may have created nature, it is a self-governing, independent entity that maintains this world. Hashem is a Transcendent Being and exists beyond this world, while nature is the mechanism that governs our physical world. Typically, such a person believes that if he abides by the rules of cause-and-effect and works hard, he will be successful in life. Of course, he still realizes that Hashem possesses ultimate power and can intervene to overrule nature at any point. He will therefore daven to Hashem with tremendous kavanah: “Please don’t interfere and mess up my plans”. This person believes that everything runs naturally unless Hashem decides to interfere. Rav Dessler places this as the lowest of the three levels of belief.

The second, higher level of belief is maintained by those who believe that Hashem directly controls nature and causes everything in this world to occur. Like a person writing with a pen, Hashem has complete control over nature, and uses it like a tool. This results in a much greater appreciation of Hashem’s presence and providence in the world (hashgacha), as one recognizes that everything that happens in life comes directly from Hashem. Accordingly, nature has no independent power, and one’s experiences in life take on incredible spiritual relevance. However, this person still views nature as an entity distinct from Hashem, merely used as a tool. This begs the question: why does Hashem need a tool? Tools are only necessary when you can’t accomplish a task yourself.  You only need a pen because your finger itself cannot write. So is Hashem limited, in that He requires a tool called nature?

The third level, the highest level of belief, is one that requires a developed understanding of Hashem and His relationship with this world. One who attains this level understands that nature is simply an illusion, a mask for Hashem’s will. In fact, nature does not exist as an independent identity at all. What we call nature is actually the actualization of Hashem’s will. Hashem is complete oneness, and therefore nature isn’t separate from Hashem at all. Rather, nature is just a term we use to identify the seemingly routine events of cause-and-effect that we witness each day. Just like thoughts originate in your mind, and come into fruition through action, Hashem constantly wills everything into existence, and everything in this physical world manifests as a result. Thus, this world is really a reflection of a much higher reality.

This third level is the one presented by the Ramban in the same passage we mentioned above. He explains that the open miracles of Yetzias Mitzrayim revealed to the world that nature itself is really a hidden miracle. In other words, there is no fundamental difference between the astounding miracles and wonders that Hashem performed in Mitzrayim, whereby He uprooted the laws of nature, and the extraordinary wonders Hashem performs every single day. There is no template or natural system called nature. Rather, Hashem wills the same wonders into existence every second,[3] to make it appear as if there is an independent system in place.[4] We perceive and refer to these constant miracles as nature.

Recognizing the Miraculous Within the Natural

In essence, the only difference between open miracles and nature is the frequency. The miracles of Yetzias Mitzrayim occurred only once in history, while the miracles of nature occur every second. Just like the boy from the opening story, whose momentary cessation revealed that what appeared to be his nature was actually his constant will, the same is true of nature itself. Let us be inspired to see past the mask of nature, to find Hashem in every aspect of our lives, and to recognize the miraculous within the natural.

[2] To understand why Hashem created the world in such a way, see chapter on Parshas Tetzaveh.

[3] For a more detailed discussion of Hashem’s constant willing of the world into existence, see chapter on Parshas Ha’Azinu, section: “A Cosmic Mask”. 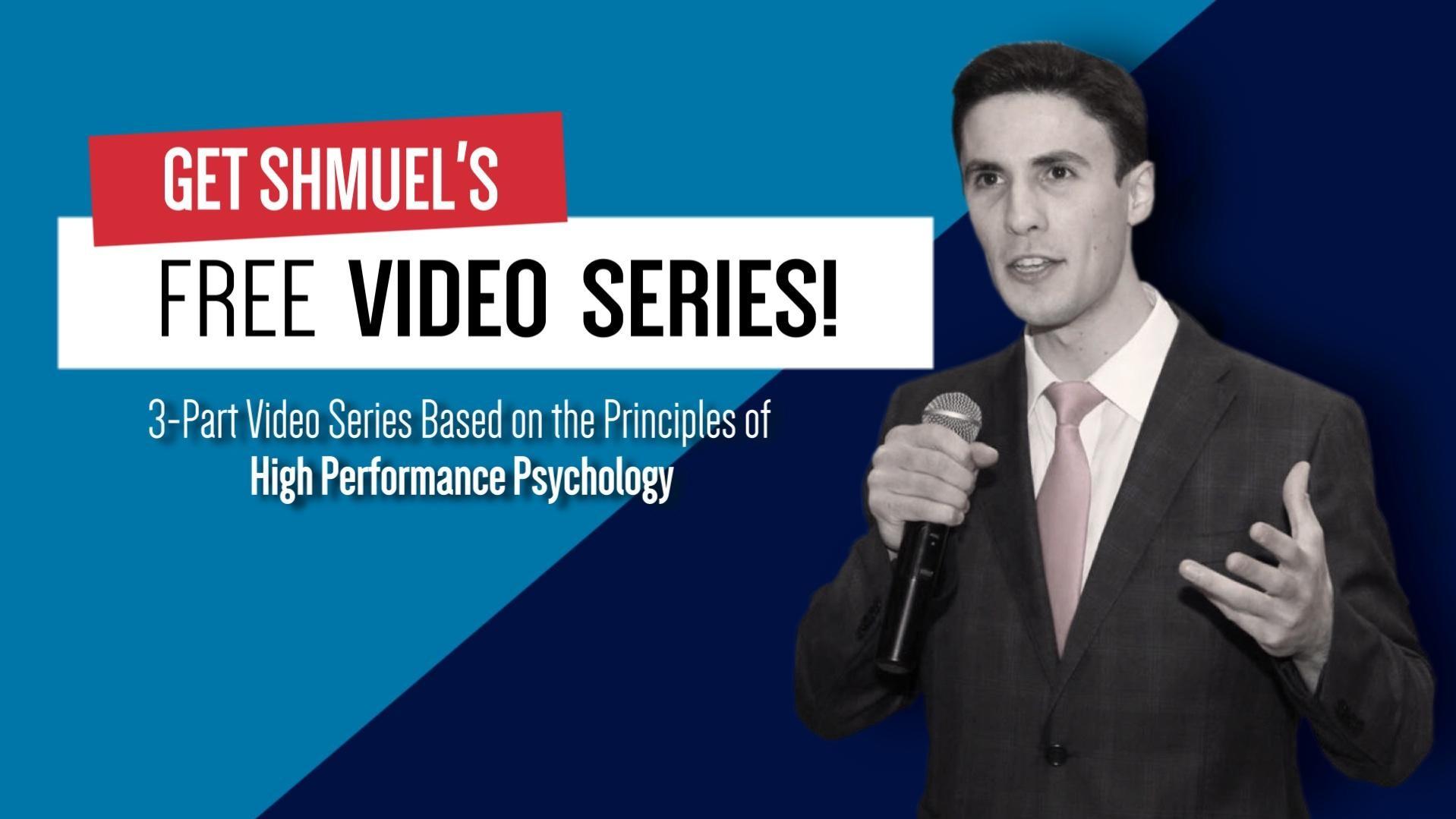